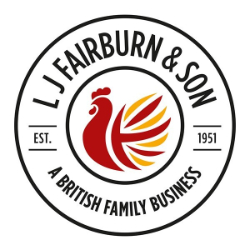 LJ Fairburn & Son is a third-generation family farming business and one of the largest egg producers and packers in the country.

Established in 1951 by Leslie James Fairburn with just 150 chickens bought for £150, the multi award-winning business is now run by his grandson Daniel, alongside granddaughters Sarah and Caroline, and Daniel’s wife Sarah-Louise.

Based at Alford, it supplies millions of British Lion-approved eggs each week to leading retailers. It is a proud Lincolnshire employer, with a 250-strong staff team, purchases around 40,000 tonnes of feed a year from farmers in the county, as well as eggs from over 20 local producers. Fairburn’s Lincolnshire Free Range Eggs, one of its delicious egg brands, can be found throughout the county in supermarkets and independent stores.

Fairburn’s is delighted to be joining other businesses flying the flag for Lincolnshire.